Clinical depression or Major Depressive Disorder is not just about feeling sad, blue or unhappy. It is a medical condition characterised by the following symptoms for a period of at least two weeks (based on DSM 5): 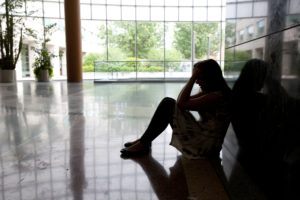 In Singapore, one in fifteen people will have a Major Depressive Disorder or Clinical Depression at least once in their lifetime. And according to the World Health Organisation, 350 million people suffer from depression globally.

Depression is a chronic illness often with episodes lasting months and high rates of relapses. It is known to cause the patient much suffering, the family distress and significantly increase the risk of suicide. Most people with depression will seek help from their family doctors. Sometimes, they present to the doctors with only physical symptoms such as headaches, chest pains or body ache. This form of presentation is particularly common in people with chronic illness as well as in teens and the elderly. As a result, depression can often be masked and the diagnosis of depression may be missed or disregarded.

Severe depression can be readily recognized but it may be difficult to distinguish milder form of depression from emotional changes associated with everyday life. Life stresses such as job loss, divorce, and the death of a loved one can result in a sad mood of short duration. Clinical depression or Major Depressive Disorder develops when depressed mood becomes much worse and persistent and is accompanied by other symptoms and lasts for more than two weeks. When depressed, a person may start to have difficulties with his sleep. He feels unmotivated and will no longer be interested in his work and the usual things he liked. He can also have problems with his appetite and weight. When performing activities, he has little energy and cannot concentrate. He may feel guilty about things he has done wrong and ruminate excessively about the past. When the depression becomes more severe, he will feel that life is hopeless and may contemplate or even attempt suicide. Patients tell us that when they are suffering from Major Depressive Disorder, it is like wearing a pair of shades that cannot be removed and everything looks dark and gloomy.

Children can also suffer from depression. However, the presentation may vary across ages. Younger children with depression may present with lack interest in activities they previously enjoyed, become overly critical of themselves, and having feelings of hopelessness about their future. Difficulties at school may arise from a decrease in ability to concentrate during classes. Depressed children tend to lack energy, have problems sleeping and may be irritable. They may have physical complaints such as stomach aches or headaches. They can have suicidal ideas which may even progress to suicide attempts. The presentation becomes more “adult-like” as the child progresses through to adolescence with adolescents presenting with more sleep and appetite disturbances, suicidal thoughts and suicide attempts.

Like most medical illnesses, the causes of depression are multifactorial, that is to say that many factors come together at the same time resulting in depression for an individual.

If you are suffering from depression, it is likely that you have a biological predisposition. Sometimes this can be genetic and hereditary. In people with depression, the levels of certain neurotransmitter chemicals are low between the synaptic clefts of neurons in the brain. Antidepressant medications work by increasing these neurochemicals.

Psychologically, you may have inaccurate negative believes and thoughts about yourself. Having a negative self image will make you feel lousy about yourself and you may think that you are not worthy as a person or you may feel unloved. Psychotherapy will help you to identify these negative automatic thoughts and your psychiatrist will teach you how to deal with them.

Socially, you may be facing difficulties and stresses. If you are juggling between your job, studying for your postgraduate examination, anoxious about the birth of your newborn and moving to a new apartment all at the same time, these life events can often weigh you down and trigger an episode of depression.

As patients with physical illnesses have more stresses in their lives, depression often develops in patients suffering from medical problems such as diabetes, heart diseases and renal failure. This can cause problems as the patients are then less likely to comply with the treatment for their physical illnesses. Consequently they get trapped in a vicious cycle of worsening physical health and mood.

Felicia is a 42 year old lady who works as a manager. She is married and has three children. After a recent re-organisation in her company, her workload increased and she had been finding it increasingly hard to juggle both her work and the care of her children. She felt that her husband was not contributing enough time and effort with the family and was angry with him for not alleviating her load at home. She had to leave the care of her children with her maid but could not help feeling jealous when she noticed that her children seemed closer to their maid than to her. She started to have bad nights where she would lay in bed anxious about her work and worrying if her daughter could cope with starting Primary One. Her anxiety worsened as she tossed and turned in bed trying to sleep. As a result, she could not concentrate at work the next day and was increasingly irritable, often shouting at her subordinates for minor mistakes they made. As her mood deteriorated, she started feeling guilty and felt that she was a lousy wife and mother. She started thinking that she was a failure in life, dreaded waking up in the morning and thought that she would be better off dead.

After two months, Sarah’s husband noticed the change in her mood and brought her to a psychiatrist. She was diagnosed with a Major Depressive Disorder and was started on an antidepressant medication. She also saw a therapist to correct her negative thoughts. With treatment, her condition improved over time and she was eventually able to stop her medications after eight months of treatment.

Other Types of Depression

Other types of depression include:

1) Dysthymic Disorder – Long term mild depressive symptoms for more than two years.
2) Cyclothymic Disorder – A milder form of Bipolar Disorder where the sufferer alternates between depressed mood and hypomanic symptoms.
3) Seasonal Affective Disorder – Depression with a seasonal pattern, usually starting in winter.
4) Antenatal and Postnatal Depression – Women are at risk of depression during (antenatal) and after (postnatal) pregnancy.

Many sufferers are worried about seeking help. They think that they may be stigmatised and their career or studies will be affected. However, without treatment, depression in itself can cause difficulties. Sufferers find it hard to concentrate and are tired all the time. They have no mood to do the things they like or to do their work. Many feel like life is no longer meaningful and wish that they can sleep their life away. In severe depression, they may have suicidal thoughts and may act on these thoughts.

Antidepressants are effective in the treatment of Depression. The doctor with the patient will make the choice of an antidepressant based on factors such as age, concurrent medical conditions, prior responses, side effects profile and consideration of cost. Short term cautious use of sleeping pills may be indicated when there is severe insomnia.

In milder forms of Major Depressive Disorder, the patient can choose to have only psychotherapy. Many forms exist and the most common and effective is Cognitive Behavioural Therapy (CBT). In general, patients with depression often have very negative views of themselves, their future and the world around them. It is therefore important to correct their erroneous negative thinking and to motivate them to return to doing the activities they like. Sometimes, treatment can consist of both antidepressant medication as well as psychotherapy to improve the outcome for patients. If depression is very severe and the patient has not improved on other forms of treatment, electroconvulsive therapy may be offered.

Family therapy or counselling should be provided if family or marital conflicts caused and are maintaining the depressive mood. Financial issues can be addressed where possible.

The rate of recovery from Major Depressive Disorder is good and more than 2 in 3 patients will have a good recovery. However, this disorder tends to recur especially when the stress that caused the depression has not changed.

Fortunately, effective treatment is available for depression! Antidepressants have been shown in many studies to improve mood. Patients can also choose from varies types of psychological therapy. You have a right and can choose your preferred modality of treatment when you see our psychiatrist. Remember that you can improve with the right treatment and there is not need to continue to suffer the symptoms of depression.

difficulty falling asleep, waking too early, tossing and turning in bed, worrying about sleep, easily tired the next day All … END_OF_DOCUMENT_TOKEN_TO_BE_REPLACED

Call for an appointment with our doctor today and embark on the road to psychological well-being and mental wellness.